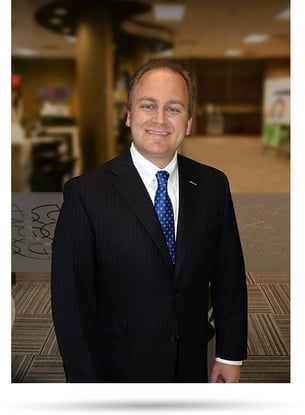 Why Datamax? Datamax affords the opportunity to be a part of a winning culture that promotes Ravings Fans, where every employee’s role has importance, and will therefore play a significant part in making Datamax Inc. a prosperous organization for generations to come.

Steven was born and raised in St. Louis, Missouri. Steven’s grandfather, Edmund (Bud) Sumner, founded A.B. Dick Products Company of St. Louis in 1956. The business originated in the coded paper, mimeograph, and offset press business. In 1973, Steven’s father, Steven P. Sumner joined the corporation. By 1979, upon the untimely death of his father, Steven P. Sumner assumed leadership of A.B. Dick. A.B. Dick took on the name of Datamax, and in 1981, through the cultivation of multiple manufacturer relationships, broadened its offerings into office equipment and technology services.

Steven graduated from DePauw University; Greencastle, Indiana in 2003 with a B.A. in Communications, and worked in the investment advisory industry before joining Datamax. In 2009, Steven joined the organization and began his career with Datamax in sales. By 2010, Steven assumed the role of Director of the Technology Services group at Datamax of St. Louis.

By early 2013, Steven became the Vice President, Secretary, Treasurer of Datamax Inc., and took responsibility for all corporate operations, administration, and finance. Steven’s oversight presently includes Human Resources, Risk Management, Accounting, Treasury, Information Technology, and Leasing. Steven is constantly working to enhance and streamline numerous processes and procedures in the areas for which he is responsible. These improvements continue to result in a better running corporate infrastructure for not only our employees, but also our customers.

Steven believes in creating Raving fans out of our customers and employees, and achieving this begins with the direct actions of the corporation’s leadership. The foundation of a strong and well-respected company depends on the integrity of its leadership and the ability for those individuals to build loyalty, trust, and credibility among employees and customers through honoring our commitments, and always acting on our promises..

Something Bigger:  Further research and developments in a cure for all forms of Cancer, but most specifically, childhood cancers and Leukemia.